Apple’s digital assistant, Siri, is more than just a voice control system as it can remembers context as well as understand relationships. For example, you can tell Siri to call your family member’s (your mom’s) phone and it will know who that is and which phone number to dial. Siri can also send iMessages or SMS, and even email any of your contacts.

Siri will need to either learn who your wife, best friend, boss, or other relationships are before it can associate them with the proper contact. You can edit the Contact to enter that information, but what fun is that? The easier, faster way is simply to tell Siri what your relationships are.

To do this, see article How to Add Relationship Information to Your Contacts Using Siri.

Siri can place calls to someone by name, or simply by relationship, and to any phone number you have. It works especially well when driving.

STEP 2: Tell Siri who you want to call. For example, you can say something like “Call mom.”

STEP 3: If the contact has more than one phone number, Siri will ask you which number you want to call.

NOTE: If you know you want to call to someone’s work or mobile phone, you can make it faster by saying “Call mom at work” or “Call mom’s iPhone.” 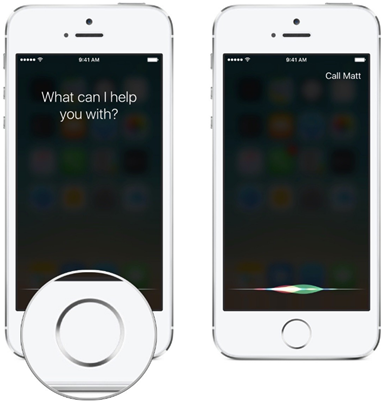 The call will take place as soon as Siri is prompted. So, make sure you really want to call someone.

Sending an SMS or iMessage With Siri

Siri can quickly and conveniently compose SMS and iMessages either to a single or multiple recipients. Just like calls, it’s especially useful when driving.

STEP 2: Tell Siri you want to send a text message to someone. For example, you can say something like “Text Heather I’ll be late for dinner.”

NOTE: If you don’t say the contact or relationship immediately, Siri will ask you for a phone number, contact name, or iMessage-associated email address.

STEP 3: Tap or say Send when Siri asks you to confirm the message. If you’re not happy with the message, say “change it” to re-dictate it, or tap or say Cancel to abandon it.

Messaging with Siri is not limited to just sending text messages; Siri can also send emails, both to individuals and to multiple recipients.

NOTE: If the contact has more than one email address, Siri will ask you which address. If you know you are sending an email to someone’s work address, you can make it faster by saying “Send an email to Leanna at work.”

STEP 3: Tell Siri the subject of the email. For example: “Apps”, “Lunch”, or “Vacation plans.”

STEP 5: Tap or say Send to send your email. 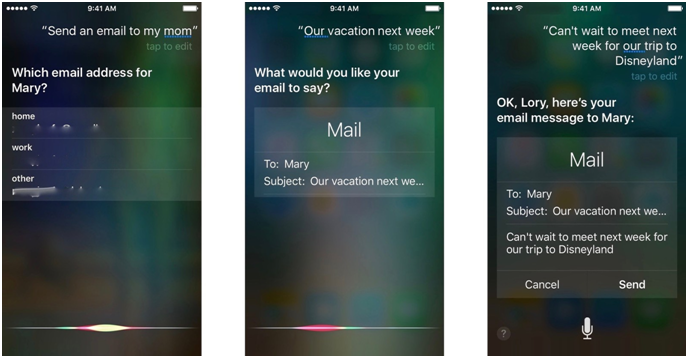 STEP 6: If you’re not happy with the email, instead of confirming it, say “change subject”, “add”, or “change message”. You can also tell Siri to “cancel” to abandon the email completely.


What Our Customers Say